I’ve waited a long time to try this restaurant an I’m glad I finally did it. I’ve driven by it and was always hesitant because from the outside it looks like an old Chinese diner that serves all day breakfast for $2.99. However, the inside is completely different. It’s actually really contemporary and relaxed with donated art pieces. Quite hipster actually.

The chefs and cooks are actually Japanese. Each dish is prepared upon order rather than mass produced. It’s one of those places that feels so home made that a dish may taste a little different the next time. It’s homemade Japanese comfort food with a slight twist. For a place that self quotes “Canadian Japanese food” I expected the kitchen to be run by students of all nationalities; but it’s actually older Japanese people, maybe even family run. Nothing gourmet here – just creative ideas, made with few ingredients, done well.

We ordered all izakaya dishes – but if you go for a large plate they recommend the Cod Miso-Teri or Sukiyaki Steak Frites. I hear about their “Ping Dog” and wanted to try it so I asked about it; but the server was really honest and said “it’s a bratwurst”…so I passed. 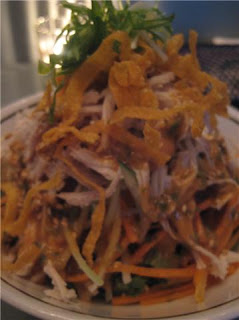