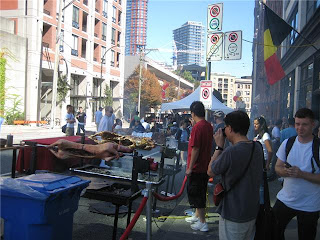 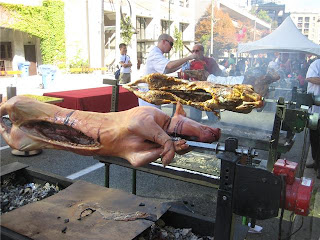 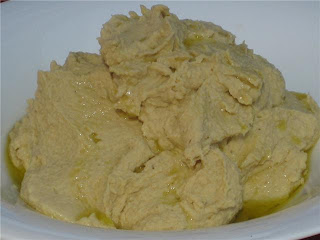 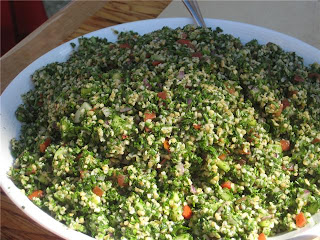 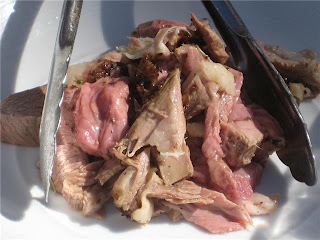 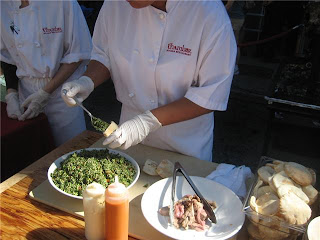 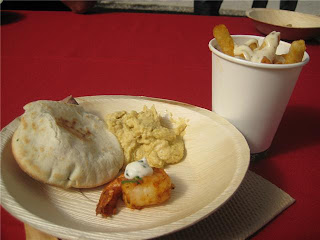 So this blog entry focuses specifically on Chambar‘s 5th year appreciation bbq that took place last Saturday afternoon. It was a free event that was advertised through word of mouth and loyal clientele. This is one of my favourite restaurants in Vancouver. I love it. Everything is done and presented really well – although it is on the pricier end, I think the quality is worth it. It’s orgasmic food – the flavours merry really well, and the food is done with care and creativity.

That’s the good…unfortunately the bbq was not so good. For the sake of Follow Me Foodie I’m going to try and stay focused on the food and not the organization of the event or service – not good. Actually, it’s hard for me to keep it in…I have to say something…

Ok well they blocked off the whole street for a big bbq event/production. There was a stage set up for music and a tent set up where kids could get balloon animals from creepy clowns and their faces painted. All sounds pretty good right? Not really. I think it’s fair to say that when you go to a restaurant appreciation party you expect food. Well let’s just say they cheaped out at the bbq in terms of food (sure it was a gourmet spit roast bbq pork, but that’s all it was). Everyone pretty much got to try a sample…it’s like they were afraid to run out, and they wouldn’t have at all.

I just don’t think they should call it an appreciation party, starting at 12pm lunch time, and just serve a sample – doesn’t show customer appreciation. They also started at 2pm instead of the advertised 12pm, so people waited and were hungry. They gave juice and waffles to only children for a while – waffles were given to adults later. Juice was never served to adults and even parents thought this was odd. Organization wasn’t great. Free loaders AND LOYAL customers were not impressed. It’s a restaurant and people expect food, if your going to hold back on food then just charge people $5-10, but if you do this than don’t call it an “appreciation bbq”. *sigh*

Now that that’s out – on to the food!

YES – looking at the photos it WAS a gourmet style bbq. They had 3 pigs being spit roasted outside. It was pretty amazing. They spent about 6 hours roasting these pig and started at 8am that morning – knowing that it would take 6 hours AND knowing that the bbq would start at 12pm – they should have really started earlier or advertised the event to start later. People were drooling over the pork, however they didn’t serve it until 2pm! And you only got to try a piece – the size of a sushi. Pretty cheap.

They took those mini pita pockets, stuffed it with a LITTLE tabouleh salad (from sister restaurant Cafe Medina next door to Chambar), squeezed a bit of dressing and added a sushi sized piece of meat to it. Really weak. And everyone just got one and you had to move on.

Then they had a bowl of hummus – to eat with nothing! No pita, nothing. Just one mini pork pita per person and hummus – just hummus. I asked for another pita for the hummus, but they said no. They prepared 15 servings of fries with garlic aioli mayo….15 servings!!!! There were about 150 people in line! I’m not sure if they brought more out later, but bottom line is some people got them and some people didn’t. Then they had some shrimp – one per person which is reasonable. These were really good, but I bet you they ran out of these. They wouldn’t have ran out of pork though – they should have given at least 2 mini pitas per person, or at least stuffed it with more pork. Looked really bad, and people thought it was really pathetic. Everyone anticipated this gourmet bbq and showed up expecting to be fed well (because it IS Chambar afterall), but unfortunately it was rather disappointing.

Pork – really tender and juicy. Yes – it was good. I liked it in the pita with the tabouleh.

Shrimp – was wicked. The best part. I’d order this.