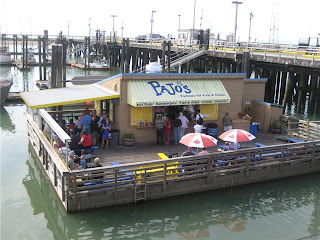 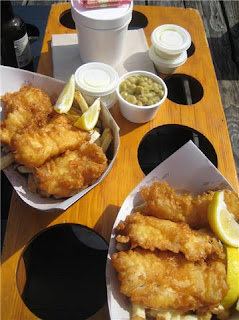 **Recommendation: “One of Each” – Cod, Salmon, Halibut (I like salmon the best – skip the fries, they’re soggy), Crab Cakes

I came here based on a recommendation and I would have never found it on my own, although it’s a popular tourist location. It’s right on the dock and you have to walk right to the end of Steveston Village where all the boats are docked and walk down a ramp in order to find it. It’s not really hidden, it’s just there’s nothing else around it so you rarely wonder down that area.

It’s famous for their fish and chips, but I don’t think it’s the best fish and chips I’ve had. If you’re going to claim “famous for fish and chips” – I’m going to expect a lot. It’s more “famous” because they’ve been there for so long, not because the fish and chips are better than everyone else. The pieces are kind of small and the chips are soggy; I think the outdoor self-service atmosphere is what makes this place great – not the food. Go for the atmosphere, not if you’re expecting the best fish and chips of your life. It’s really one of those “been there for 0ver 20 years and is part of Steveston history” places that you bring your kids and family to. Great for a visit on a hot summer day.

My favourite fish and chips is Moby Dick Seafood Restaurant in White Rock.

Note: The fish and chips are inconsistent. Ours were a soggy batch because we ent during busy hours and they have a batch of pre-made ones. It depends on your luck, the really sweet lady next to me let me try hers and hers was a a good batch – nice and crispy. 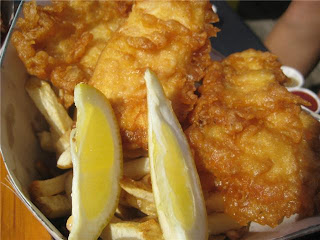 So, I was ready to do “The Dirty”… burger that is, but things got out of control. Like, really out of control. It was the type of dirty where you roll up your sleeves, use both hands, open your mouth really, really wide and prepare to get sauce all over your… okay, there is no way to make this sound “good”, but boy was it good.