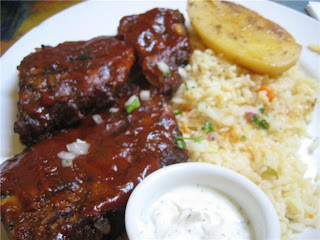 Food: 4 (Based on what we had. I didn’t try enough though so the rating could be unfair)
Service: 3
Ambiance: 1.5
Overall: 3
Additional comments:

**Recommendation: BBQ Baby Back Rib dinner, Souvlaki (moussaka is supposed to be good, but I didn’t try it)

This restaurant is super shady. It’s in a strip mall that looks abandoned. We were the third group in there at 6pm on a Tuesday…which isn’t bad. It also filled up decently by 7pm, mostly by locals living around the area. I really hesitated when I saw this place from the outside, but it does have positive word of mouth. Panos is really your reliable go-to hole in the wall Greek restaurant. It’s authentic homestyle Greek cooking and I could even see the Greek men in the back peeling away at potatoes on their little stools in the kitchen. It’s family owned and operated and it really feels like it to from the moment you walk in. It’s almost like a Greek diner more than a restaurant. It is a bang for your buck though – big portions and it’s cheaper than average. Souvlaki dinners are around $12 and the most expensive thing is I think $15, maybe $17 for the fish/seafood plates.

Focusing on just the food, it’s hard for me to say how good everything really was since I only tried 2 things on the menu. I will go back to try more items since I hear lots of good stuff about it and that way I can also give a fair and complete review. 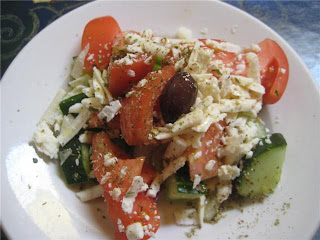 It took me a while to conjure up my 10 trends for 2014 though, hence why I’m writing this after the new year. Nothing seemed all that inspiring or “new”, not that creativity is dead, but most of it really has been done before.