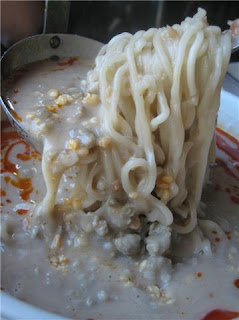 **Recommendations: A noodle dish…my noodle dishes were just ok. I haven’t tried everything but next time I would probably go for a noodle dish that comes with a light or clear broth Eg: Ramen and noodles

I’ve heard of this restaurant through word of mouth, but that’s about it. Even Chinese people don’t really know about this restaurant. Actually you wouldn’t even know it was a restaurant unless you were looking for it or someone told you about it. From the outside this place looks like a giant factory – which it is. The back end of the restaurant is dedicated to the noodle factory and the front end serves as a restaurant.

Walking in I was actually quite surprised and impressed with the restaurant set-up. Knowing it was a noodle factory I thought the restaurant was going to be a couple wooden stools and a couple counter tops, but to my surprise it was an actual restaurant set-up with comfy dark brown leather chairs and contemporary decor. The decor and food actually comes across as “Chinese food for white folk”, but nonetheless it’s still fresh, high in quality and pretty good. I expected the prices to be cheaper since the noodle factory is operated right in the back of the restaurant – but it isn’t. It’s average priced or even a bit more expensive (for average, or even a tad smaller portions) and Chinese standards. 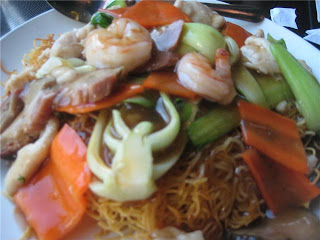 “BAM!” “Let’s kick it up a notch!” “Let’s add a little more garlic!” *Clap hands*. Guess which restaurant I’m at?! No, it’s not Guy Fieri, if it was him I would have started with “That sauce is money!”. BAM! It was Emeril Legasse!