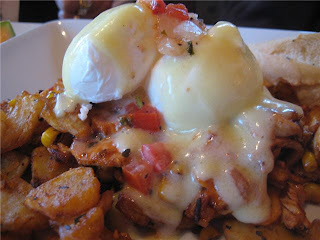 We couldn’t find a family-owned breakfast/brunch restaurant around the area so we just settled on Milestones. I’m not against chain restaurants or anything, but I usually chose them out of convenience or if they have a new item to try. I usually try and find the independent places.

I am actually quite impressed with the brunch we had at Milestones. They bring traditional breakfast items to new heights and add their own gourmet touches and creativity. Most of the options are quite hearty and the portions are quite big so it fills you up for most of the day. The best thing is that the sauces are homemade – I just wish the breads were too…but that could be asking for too much…?

I would come back again to try the other items or even just the grilled chicken corn hash, that was really good! 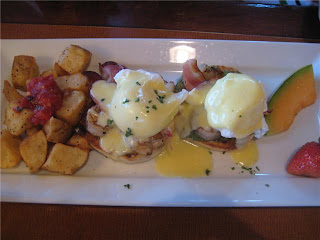 It was the 2nd Annual Feast Tofino and I attended the West Coast Paella on the Beach featuring Vancouver Island Chef Kunal Ghose from Food Network’s Top Chef Canada Season 2. It was the biggest paella party featuring the biggest paella I’ve ever seen in my life. Forget long walks on the beach, I want paella on a beach!