Food: 4.5 (went down ½ a point since they changed the seaweed that comes with ramen)
Service: 2
Ambiance: 3
Overall: 4.5
Additional comments:

This was my 3rd time at G-Men Ramen Noodle Shop. I want to try everything on the menu. It’s one of those restaurants where the menu is small, so it’s possible…and I’m determined. I want to give the best recommendations possible.

I came for lunch and tried the Natto set. My friend ordered the Special ToriGara Shoyu Ramen and I was really disappointed because they changed the seaweed that comes with their ramen. The waitress said the quality of the shredded ones they used to use were no longer good…so they decided to switch brands. I think they should just find a new supplier and stick to the shredded kind because it tastes so much better. 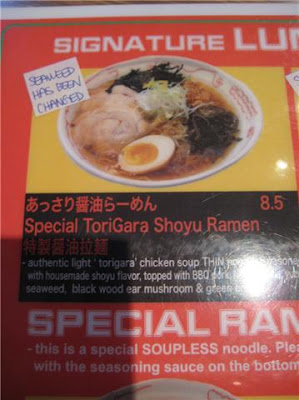 Added note: In my 1st restaurant review for G-Men Ramen Noodle Shop I said that it was better than Kintaro’s. However I would like to explain this is a bit. It’s not necessarily better than Kintaros, but it’s different. Kintaro’s is a much richer broth (even their light broth is richer than the one here). Kintaro’s is more Japanese whereas G-Men is still Japanese, but the flavours are somewhat catered to Chinese tastes. I think older Chinese people will like G-Men better, but younger people may like Kintaro’s better.