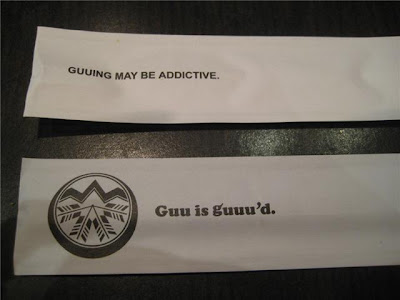 I’ve been to Guu on several occasions and I’ve never been disappointed. It started off with one humble location and now it’s expanded to 6 restaurants in Vancouver and the lower mainland. The next location are actually opening in Toronto. I’m quite surprised that the quality hasn’t changed because I worry when places go from independently owned to a “chain” or franchise.

I have a thing for Japanese izakaya so I’ve tried a decent amount in Vancouver. So far my top choices are Kingyo, Yuji’s and Hapa Izakaya – this is also “gourmet izakaya” so it is pricier than Guu. Therefore I won’t compare them too much.

The quality and food at Guu is good, and for the price you’re paying you are getting value and an experience – it’s always lively in there. The downtown locations have more of a vibe, but the Richmond location is nice and spacious.. It ended up being around $60 without tax and tip for 2, but we ordered A LOT and over-eat as usual.

This post covers a lot of food – we made quite a dent in the menu and this was only between 2 people. Mind you we were full about half way through so it’s not that the portions were that small either. They were actually a decent size. We tried enough dishes that the good ones out-weight the not so good ones. We finished every last bite, which is always a good sign. The only negative part of this experience was the 3 of their most popular items: ahi tuna steak, seared beef sashimi & miso mayo black cod were sold out and it was only 8pm. 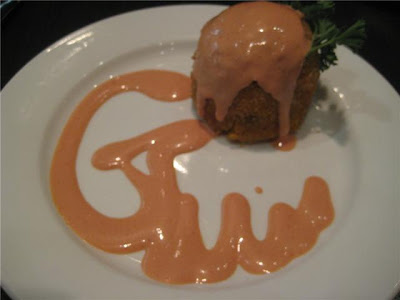 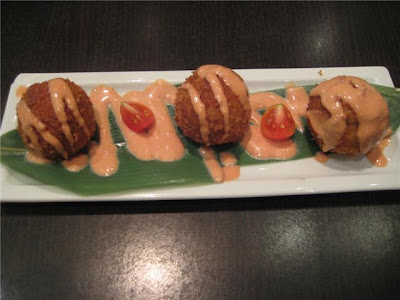 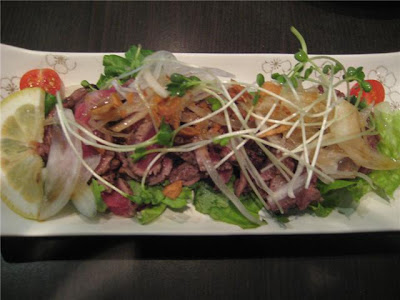 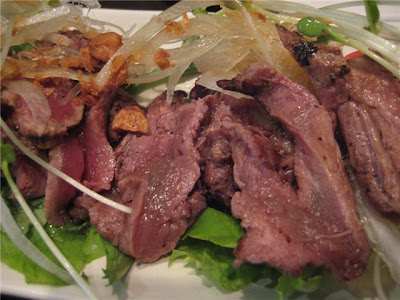 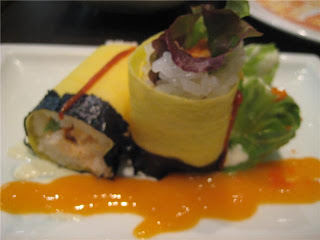 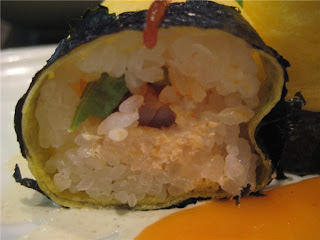 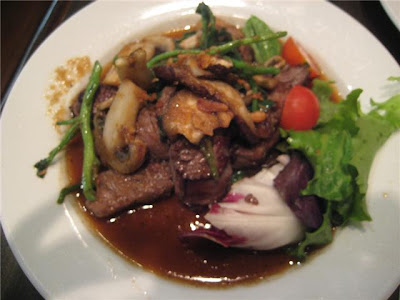 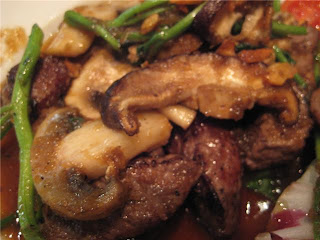 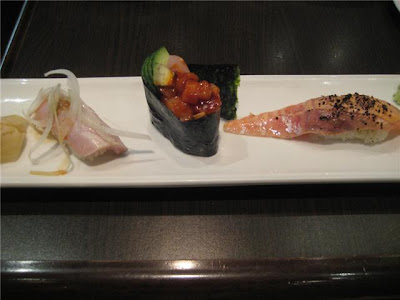 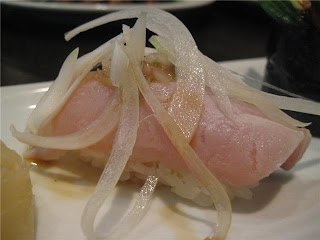 Yellow tail – 4/6: This was a yellow fin hamachi. It was topped with minced garlic in a little vinaigrette and some sliced raw onions. 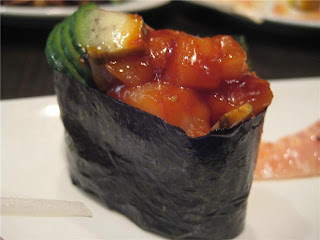 Spicy Tuna – 3/6: Instead of tuna, we actually got chopped salmon sashimi. It was served on sushi rice and wrapped in a sheet of nori. It tasted almost like spicy tuna sushi, but better. It starts off sweet before it gets spicy. It was one of the better spicy marinades I’ve had. This one didn’t taste like it was only Tabasco, it was very well-rounded. They also had tiny slices of avocado to balance out the spiciness. 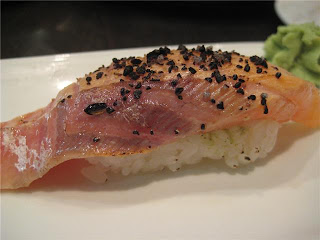 Salmon belly – 5/6: This was the best of the 3. It was lightly seared salmon belly topped with sea salt and freshly cracked black pepper. It was so simple and so flavourful. It was smoky and hickory tasting served on sushi rice with a little wasabi underneath. 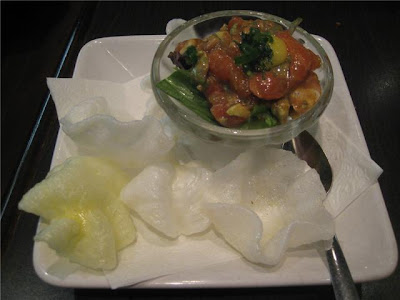 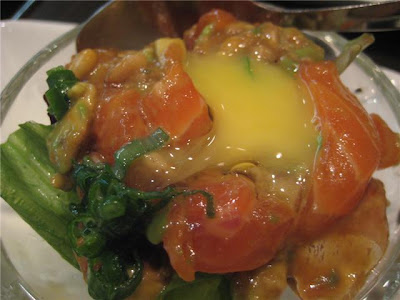 To eat: break the egg yolk and mix everything together until combined. Then you take a spoonful and fill the shrimp cracker cups. After mixing it, it becomes very creamy and a little slimy in texture from the raw egg and sashimi combo. The pine nuts helped to break up the mushy/slimy texture. 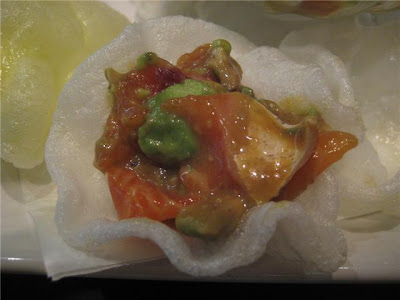 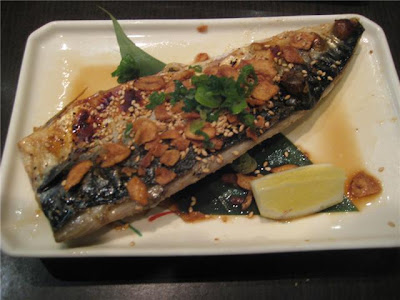 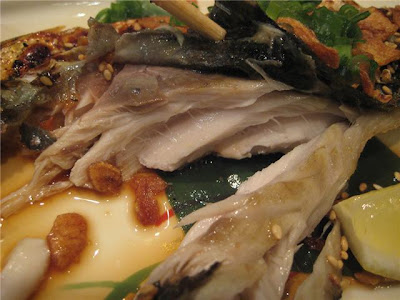 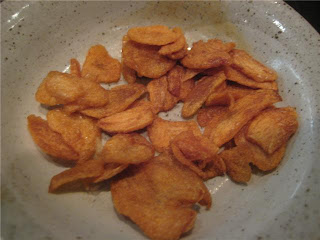 The garlic chips are always good and the waitress actually brought us an extra side of them without us asking for them. She just knows people like them. 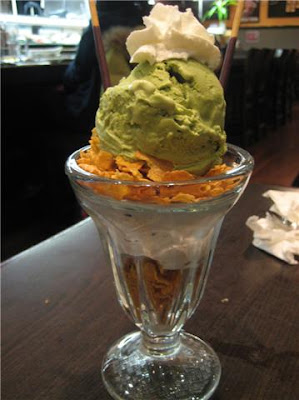 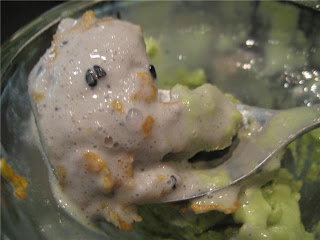 This post is based on the desserts offered at Chop Restaurant + Bar + Lounge. They have really good dessert and everything is made from scratch. I had the Caribbean Rum Cake and they used to offer a 24 layer chocolate cake.