Saint Germain’s is the most popular gourmet Chinese bakery around town. They offer a selection of Chinese baked goods and even some American and French pastries. However their versions of American/European desserts still somewhat made with a Chinese style. Basically it’s Asian people trying to make European desserts that are catered to Chinese taste buds. This means that they use less sugar, less chocolate (if it’s in the recipe) and it’s never as rich and decadent. They will usually put some fruit and very lightly sweetened whip cream in it. They love that kind of stuff. I enjoy most of the pastries here, but this review focuses on the Napoleon, just because it was what I ordered that day. 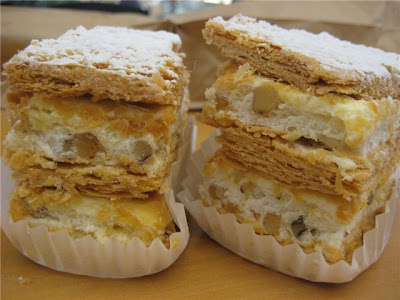 Enter the world of sous vide. Sous vide means “under vacuum” in French, but the cooking technique refers to sealing food in airtight, food-safe, plastic bags, and cooking them in a water bath at a controlled temperature for a certain length of time. It is comparable to poaching and slow cooking, but the heat is controlled and there is no loss of nutrients.