I love all things culinary-related and one of the kitchen appliances that I’ve been curious about for a long time is the Vitamix (@Vitamix) blender. Widely used by chefs and in professional kitchens, it’s known as one of the best blenders available. It’s supposed to make finely textured fruit smoothies, silky purées, blended ice drinks, sauces and soups so smooth that they don’t require straining, and much more. I’ve always wanted to play with one and Mijune has kindly let me borrow hers for a few weeks.

Coincidentally, I also happened to get some beautiful cinnamon basil from Barston Island Herbs (@BarnstonHerbs) a few days after getting the blender. Barnston Island Herbs is a family owned herb farm located in Surrey which specializes in growing fine herbs and produce for local restaurants. The cinnamon basil was freshly harvested and cut from very young plants so the leaves were small and delicate, but very fragrant. The flavour is complex and has sweet cinnamon, spicy, sweet licorice and savoury notes combined with the traditional basil essence. It’s a beautifully aromatic herb and best used when fresh but it also keeps well for up to a week.

I wanted to use the basil in a way that would highlight its unique flavour. Last summer I made a basil ice cream using David Lebovitz’s recipe in The Perfect Scoop and I thought it was a great way to use basil in a dessert. Mijune suggested incorporating almonds into it and Vitamix had informed her that the standard container could be used to make almond flour so I gave it a try. (The Vitamix came with a 64 ounce container that is suited for blending liquids, but you can also buy a 32 ounce Dry Grains container for grinding grains, flours and nuts.)

I wanted the ice cream to have a strong almond flavour but not the texture, and to keep as much of the beautiful cinnamon basil colour and flavour as possible. I adapted a basic eggless vanilla ice cream base for this recipe and divided the liquid portion into two: one for infusing with ground almonds so that the almonds could be strained out, and another for blending with the basil.

I lightly toasted 2 cups of almonds in the oven, allowed them to cool, and then tried to grind them into flour in the Vitamix. A lower speed resulted in very roughly chopped almonds so I tried a high speed but then I ended up with a layer of almond butter at the very bottom of the blender, then a layer of finely ground almonds above the butter, and a layer of coarsely ground almonds at the very top. I did some research on the Internet afterwards and discovered that I should have used a much smaller amount of almonds, like this video shows. (I’ll give this technique a try the next time I need ground almonds. I think the Dry Grains container would work better too since that’s what it’s designed for.) I added the almonds to some cream that had been heated with sugar and allowed it to infuse while the basil mixture was being made.

I was glad to find that the Vitamix worked much better for blending the basil leaves with milk. It took almost no time to get a smooth mixture that was pale green with tiny flecks of basil. After straining the almonds out of the cream, I combined the two liquid portions and allowed it to chill overnight before churning.

The strained almonds still had a lot of flavour so I wanted to use them in something rather than just throwing them away. I already had ice cream on the go, and extra basil left over so why not almond basil cookies? Cookies naturally leads to ice cream sandwiches, so win-win!

For the cookies, I adapted an Almendrados recipe from the New York Times (Almendrados are Spanish cookies made with just almond flour, sugar, egg and flavourings). The almonds still had a lot of coarse pieces in it so I used a food processor to puree them along with the rest of the ingredients until the dough was smooth. (I first tried using the Vitamix but the cookie dough was too thick for the blender.) The dough was chilled, shaped, rolled in sugar and flattened before baking. The almonds had absorbed moisture from being infused in cream and this made the dough very sticky, but it also made the inside of the cookies deliciously soft and moist with a strong almond flavour. The outsides of the cookies were crisp/chewy from being rolled in sugar, and I could taste the fresh cinnamon basil.

To make the ice cream sandwiches, I let the ice cream soften at room temperature until it was a nice scoopable consistency (5-10 minutes), then sandwiched a generous scoop of ice cream between two cookies.

This ice cream recipe can also be made with the leaves of regular sweet basil or Thai basil. (When the herb growing season was waning at the end of last summer, I made a basil ice cream with half sweet basil and half Thai because that was what was left in my garden. It was delicious served with the last of the local strawberries.) 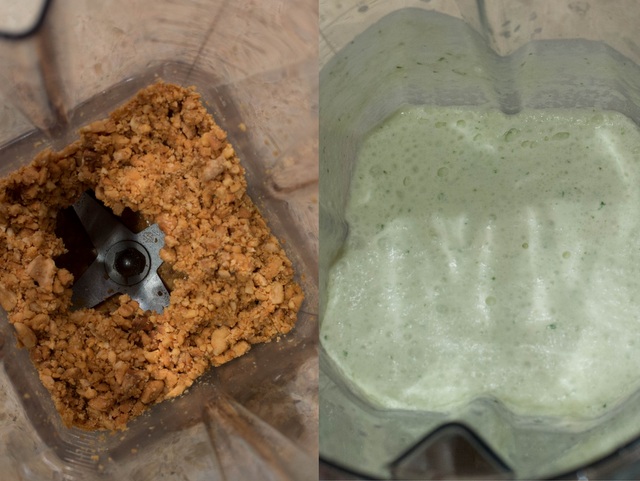 These cookies are gluten free and contain no flour or leavening, so they don’t flatten or spread as they bake. Rolling them in sugar and flattening them prior to baking gives them a nice crisp/chewy texture on the outside, and the almond butter makes them very soft and tender on the inside.

So you thought I already wrote about the juiciest and sauciest parts of the 2nd Annual First Harvest dinner at The Willows Inn? As good as Blaine’s carrot juice and Grant’s oyster and chicken velouté was, the behind the scenes look is always just as exciting.