Ugh. I hate calling anything “the best”, but for the sake of SEO and really wanting you to try this recipe. Everyone always searches “Best X” when looking for a recipe and the ones that show up on the first page aren’t necessarily “the best”. This has been my favourite horchata to date, which isn’t surprising since the recipe is adapted from Rick Bayless. He knows what he’s doing when it comes to Mexican food and there is confidence with his recipes.

This Mexican Horchata was actually for a Mexican themed dinner I was co-hosting. It started off as a mole party and then things just developed from there and we couldn’t stop. Good thing too because we found some killer recipes and it was fun experimenting with Latin and Mexican ingredients, albeit not that easy to source in Vancouver.

It is one of my favourite non-alcoholic Mexican drinks, although Follow Me Foodie to Mexico City and Oaxaca also introduced me to Tejate. Tejate is a traditional Oaxacan drink made from toasted corn, rosita de cacao (found only in San Andres Huayapam), cinnamon, and the seeds and flowers the mamey fruit (Alvin Starkman). It is often found in the street markets, but I wouldn’t recommend trying them here unless you have an iron stomach, or just be careful of the water they are using and where the ice is from. If you like Horchata it is likely you’ll enjoy Tejate because they are similar.

Horchata is a traditional Latin American and Spanish drink that’s refreshing, flavourful, lightly creamy and sweet, and very simple to prepare. It has a creamy milky texture but is made with rice and water instead of milk. Flavoured with cinnamon, it has all the comforts of rice pudding but in the form of an icy cool drink.

This recipe is from one of Chicago’s most well known chefs, Rick Bayless. His style is traditional and regional Mexican but with modernized interpretations. I admire the way his cookbooks make traditional Mexican food approachable yet the recipes are still true to their origins. His horchata recipe is enriched with almonds and is modeled after a version that he had in an Oaxacan market.

To make the horchata, raw rice, almonds and a cinnamon stick were soaked in water overnight. For the cinnamon, Mijune had given me some smoked cinnamon sticks a while ago from a talented local pastry chef, Kira Desmond. They had an incredibly intense spicy and smoky aroma so I used one for the horchata to add a little extra complexity beyond the cinnamon flavour. (The smoked cinnamon sticks have been fun to experiment with. I’ve used them with hot apple cider, as a coffee flavouring, in baked goods, and in curries and sauces. I’m not exactly sure how she made them but I plan to try making them myself soon. I’m guessing they were done in a smoking cabinet or heated over a charcoal grill. Since cinnamon sticks are very dry and can be easily lit on fire, they may have been soaked in water prior to smoking or smoked at a lower heat. Regardless, it will be best to keep a close eye on them during the process.) 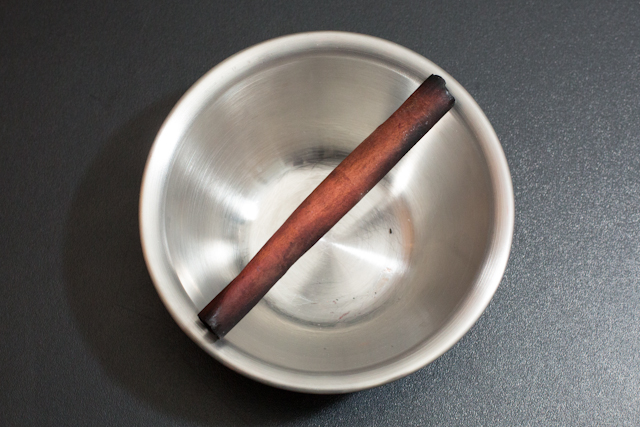 To finish the horchata, the soaking water, rice, almonds and cinnamon stick are blended for several minutes until very smooth. The mixture is strained to remove excess pulp and thinned with additional water (or milk) before serving.

I’ve made this recipe several times and it’s my go-to drink whenever I make Mexican food. (It was served as part of the mole dinner party.) For this most recent batch, I noticed some interesting results. Previously I had a conventional household blender and even after blending the mixture at the highest setting for several minutes, I ended up with ~1 cup of pulp left over after straining. (Since the pulp was essentially sweetened uncooked rice & almonds, I tried cooking it with extra milk to see what would happen and ended up with warm horchata pudding – bonus!)

When I first made this drink with the VitaMix blender at the highest setting for several minutes, I barely got 2 Tbsp of pulp. The VitaMix did such a good job of blending the rice and almonds that the horchata was noticeably thicker and richer than the ones I had made with my old blender. (Actually I loved the warm horchata pudding from previous batches so much that I was disappointed when I didn’t get as much pulp this time. I also found that I preferred a lighter and thinner horchata so for the next batch, I plan on blending the mixture a little less with the VitaMix so that more pulp can be strained out. Out of curiousity, I tried cooking the VitaMix’d horchata liquid on its own and found that it also thickened into a pudding but much faster than before due to the very finely ground rice.) 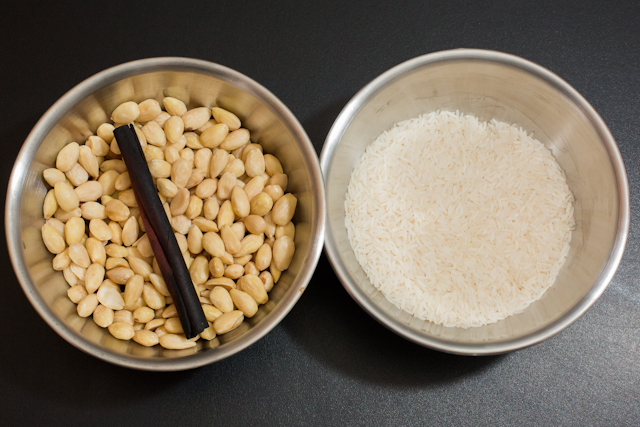 Ingredients to be soaked overnight 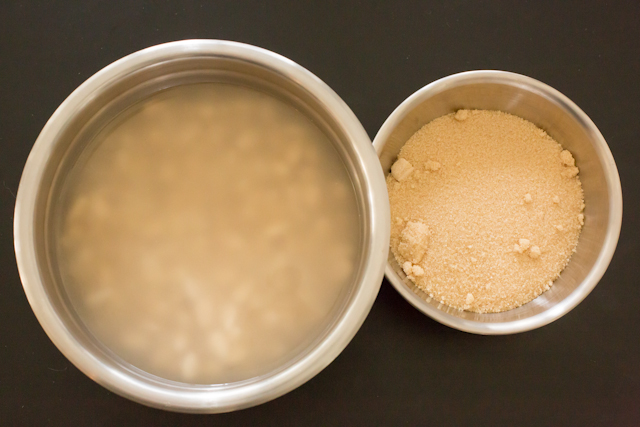 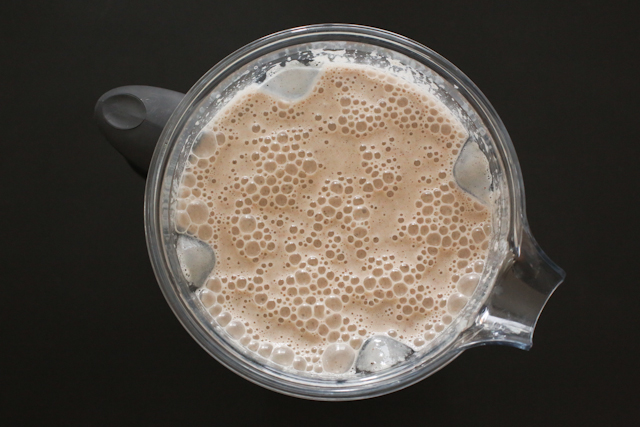 No one wants to waste their time on something not worth waiting for, so here are a few local take-out haunts I’d happily line up for. All of the following restaurants almost always have a line-up, as well as limited seating. But the line-ups move relatively quickly – making them bearable.