Granola. It’s probably one of my favourite snacks. It’s not for health conscious reasons, and not all are even healthy with all the added sugars, but I just really like it and always have. I love nutty things and crispy crunchy textures and I can eat granola at any time. It’s also convenient when I’m traveling and it’s a perfect snack on the plane.

The first time I tried the Eleven Madison Park granola was actually at my friend Brenda’s place. I wasn’t aware that she was using the Eleven Madison Park recipe and didn’t even make the connection when I had it at the restaurant a couple months later. It’s the parting gift at the end of dinner and if they had it for sale I would have bought a few jars. The granola here is one of my favourites to date, next to the one I had at Aziza in San Francisco.

It’s noticeably saltier than most and the dried fruits are good quality and not hard or dry. The version I had wasn’t with dried sour cherries, coconut or pistachios, but the technique to make it was the same. It’s very light, loose and crisp without the big crunchy chunks, which I usually love, but in this case I didn’t miss them one bit.

Making granola is easy and I know you might think “it’s just granola”, but if this one was good enough to re-make and post about, it must be really good – and it was!

The following is a guest post, recipe and photos by Brenda.

Eleven Madison Park was on my restaurant list long before I had ever visited New York last fall. It’s been getting positive press, awards and accolades ever since restaurateur Danny Meyer opened it in 1998 but its star really began to rise when Chef Daniel Humm took over the kitchens in 2006 and it received four stars from the New York Times several years later in 2009. A gorgeous namesake cookbook was published in 2011 and its modern layout, photography, and attention to detail reminded me of my first impressions of the French Laundry Cookbook back when it was published in 1999. 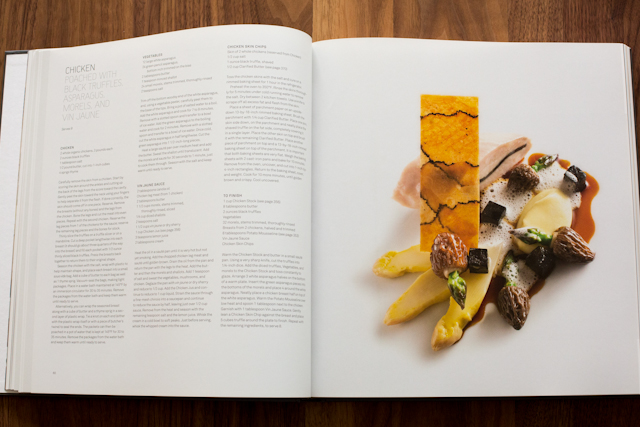 Just as the French Laundry cookbook has a very doable family meal lasagna recipe and a homestyle apple cake recipe, the Eleven Madison Park cookbook also has an approachable recipe that evokes warm, generosity and hospitality.

It’s a recipe for granola. Yes, granola. At the end of every meal at the Eleven Madison Park restaurant, a meal which consists of over a dozen courses from a fixed tasting menu, they give their guests a parting gift of a jar of housemade granola. I had known about the granola from researching the restaurant prior to my trip and the recipe is available online on the New York Times’ website as well as in the cookbook. However, it wasn’t until after my incredible meal at the restaurant and after I had tried their granola that I was compelled to make it myself. Apparently there’s granola, and then there’s Eleven Madison Park granola. In hindsight I shouldn’t have been surprised that my favourite to date was theirs. So much so that I make this recipe at least once a month and often more, especially when I’m making it as gifts for other people.

The granola is a contrast of textures and flavours: the crunchy, sweet, salty, nutty, fruity, tart and savoury aspects come from coconut, olive oil, maple syrup, pumpkin seeds, pistachio seeds, sour cherries, and salt. The nuts and cherries are left whole so that each bite is slightly different and keeps you going back for more. It’s ridiculously addictive and my favourite way to eat it is straight from the jar. I always have a jar of it on the counter at home and it’s all too easy to grab a handful every time I walk by.

Making the granola is very simple and straightforward: the sour cherries are set aside until the end, the sugars and olive oil are heated together, the rest of the ingredients are mixed together before being combined with the sugars/olive oil and then baked, finally the cherries are added last. Eleven Madison Park’s recipe called for 1 Tbsp of salt which sounded like a lot so I decreased it to 2 tsp and that was enough to season the batch and still have the salty sweet flavour. (There are numerous online comments about the salt level in the recipe. Many people decrease the amount even further.) The published recipe also says that the yield is 6 cups but I’ve been consistently getting ~8 cups – definitely not a bad thing!

The cookbook also has recipes for Curry Granola and Vandouvan Granola that sound very intriguing. Previously I’d never been very excited about granola recipes (actually theirs is the first one that I’ve made) but the Eleven Madison Park granola and cookbook have given me a few ideas for how I might experiment with variations on my own. 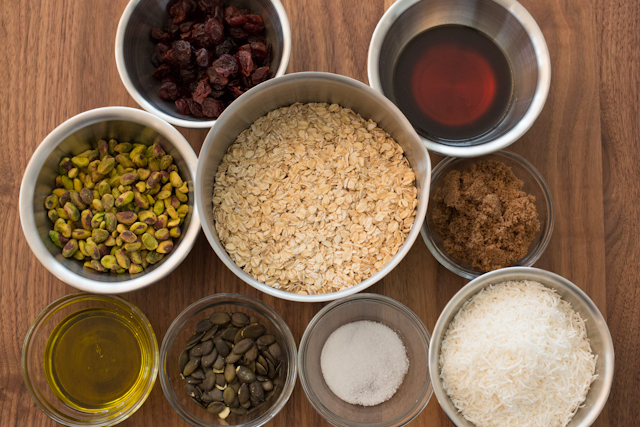 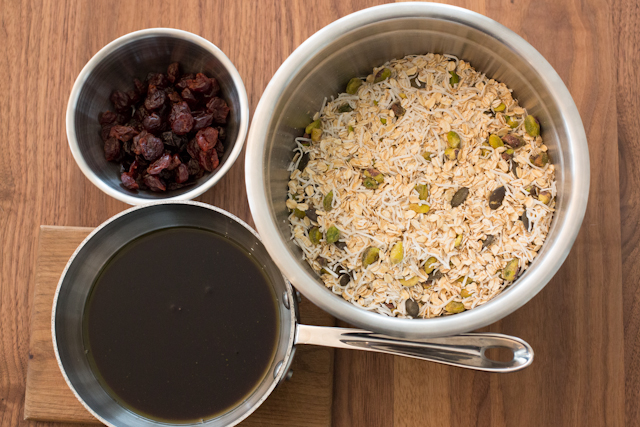 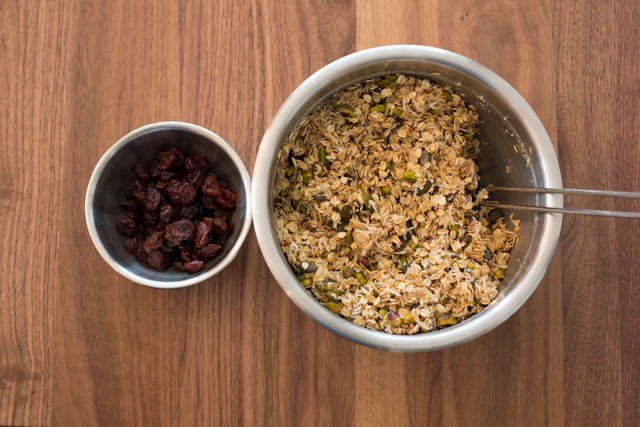 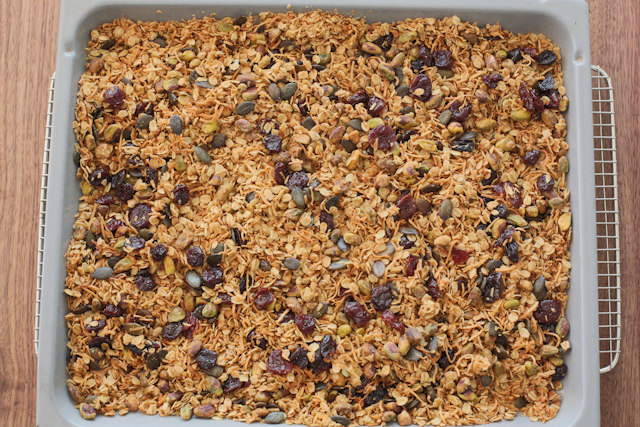 Granola after baking, with sour cherries 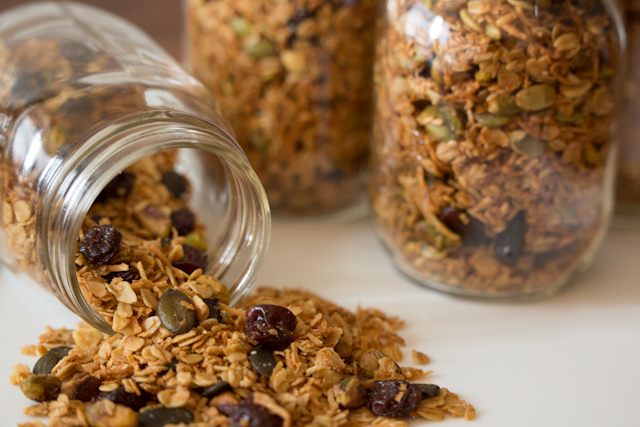